Summary: Our demo provides seated participants a sensation as if they are traveling to the several tourist sites by presenting multisensory stimulation to their whole body. They can hear and look around the environment of the playing-omnidirectional video but they cannot change the pathways of walking.

He was born in 1965. He received Ph.D. in Mechanical Engineering from the University of Tokyo. His current affiliation is the University of Electro-Communications, Tokyo. His research interests include recognition and manipulation of object in virtual environment, development of haptic device, and haptic rendering algorithm based on physical simulation.

Michiteru Kitazaki received BA (1992), MA (1994), and PhD (1997) in experimental psychology from The University of Tokyo under the direction of Professor Shinsuke Shimojo. After working with Professor Takao Sato in The University of Tokyo, then he obtained the position of Lecturer in Toyohashi University of Technology, and now is a Professor. His research combines perceptual psychology and virtual reality to investigate perception and action of humans as mobile observers, and to design future bodies with appropriate ownership, high effectivity and novel experiences.

Koichi Shimizu was born on September 9, 1993. He was received the B.E. degrees in information engineering from National Institute of Technology, Hakodate College, in 2017. He is now a master course student of Tokyo Metropolitan University. His research interests include vestibular perception and virtual reality. He is a member of VRSJ.

Gaku Sueta was born on July 27, 1996. He was received the Associate degree in engineering from National Institute of Technology, Maizuru College, in 2017. He is now a bachelor course student of Tokyo Metropolitan University. His research interests include tactile and virtual reality. He is a member of VRSJ.

Kentaro Yamaoka was born on August 12, 1995. He is now bachelor course student of Tokyo Metropolitan University. His research interests include kinesthesis of leg created by virtual reality.

Kazuki Sawamura was born on December 29, 1996. He is now a bachelor course student of Tokyo Metropolitan University. His research interests include airflow and virtual reality. He is a member of VRSJ.

Vibol Yem is an assistant professor at Tokyo Metropolitan University, Tokyo. He received the BS degree in Engineering Systems in 2010, and MS and PhD degrees in Systems and Information Engineering, in 2012, and 2015, from University of Tsukuba. He was a JSPS research fellow during 2013-5 at University of Tsukuba, a project researcher of JST ACCEL Embodied Media Project during 2015-7 and a JSPS research fellow during 2017-8 at the University of Electro-Communications. His research interests include development of user interface, haptic display, tactile mechanoreceptor stimulation’s algorithm, robotic and virtual reality system.

Yasushi Ikei graduated from the Graduate School of Engineering, The University of Tokyo with a PhD degree in the industrial mechanical engineering in 1988. He joined Tokyo Metropolitan Institute of Technology in 1992. He is currently Professor at the department of computer science, Tokyo Metropolitan University. His research interests are in the virtual reality, ultra reality, telepresence, multisensory display, and cognitive engineering. He received paper awards and contribution award from the virtual reality society of Japan (VRSJ). He gained innovative technologies award from METI Japan in 2012,2017,2018. He is currently vice president and fellow member of the VRSJ.

Tomohiro Amemiya is a distinguished researcher/senior research scientist at NTT Communication Science Laboratories, Japan. He received B.S. and M.S. degrees from the University of Tokyo, in 2002 and 2004, and a Ph.D. degree from Osaka University in 2008, respectively. He joined NTT Communication Science Laboratories in 2004. He was also an honorary research associate at the Institute of Cognitive Neuroscience, University College London in 2014-2015. His research interests include haptic perception, haptic UI systems, and assistive technologies. He has received several academic awards including Laval Virtual "Grand Prix" du Jury (2007) and Eurohaptics Best Demonstration Award (2014). 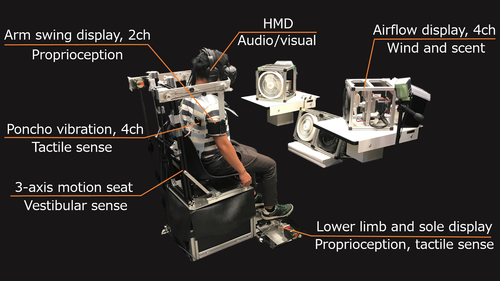 Summary: Muscle Action VR is an embodied learning virtual reality environment to promote embodied, multi-modal mental simulation of anatomical structures and functions. Users can draw muscles directly on a skeleton, manipulate them, and dynamically simulate movements in a 3D environment.

Author(s)/Speaker(s) Bio:
Dr. Jinsil Hwaryoung Seo is an interactive artist/researcher focusing on aesthetics of interactive experience. Currently she is an associate professor in the Department of Visualization at the College of Architecture and a faculty fellow in the Center for Health Systems & Design at Texas A&M University. Seo received a Ph.D. in Interactive Art and Technology from Simon Fraser University in Canada and an MFA in Computer Arts from School of Visual Arts (SVA). Her current research concentrates on designing for immersive aesthetics in the contexts of arts and education

Brian Michael Smith has a Master of Fine Arts in Visualization and works in the intersection of art, science, and technology, to develop creative applications using interactive immersive technology. He has a strong interest in using physical computing and digital fabrication techniques to create tangible virtual and augmented reality interfaces and controllers. He primarily works with virtual and augmented reality technology to create immersive educational experiences, artist installations, and audio/visual performances.

Michael Bruner is an Interactive developer and artist with a focus on creating immersive experiences. He is a graduate of Texas A&M University from the Department of Visualization where he focused on game design and development. He is now pursuing a M.F.A in Design and Technology for live performance from the University of Texas. His work is focused on how emerging technology can be integrated into environments to create moving experiences.

Austin Payne is a Unity Developer at Soft Interaction Lab. He recently graduated with a Bachelor of Science in Visualization with minors in Computer Science and Game Design & Development at Texas A&M this past year. He currently helps with development in virtual reality and augmented reality applications for educational and research purposes in Anatomy, CyberSecurity, and other various topics.

Margaret Cook is a third year Master of Science student in the Department of Visualization, at Texas A&M University. She received her Bachelor of Science in Biomedical Sciences from Texas A&M as well. Her research interests involve merging comparative veterinary anatomy with art and technology, to create educational tools for anatomy courses in higher education. For her thesis dissertation, she is exploring the use of 3D models and animation in augmented reality, to visualize the clinical effects upon canine muscle movement, produced by user interaction with the nerves of the thoracic limb.

Dr. Michelle Pine is a Clinical Associate Professor in the Department of Veterinary Integrative Biosciences at Texas A&M University. She earned her D.V.M at the University of Missouri and her Ph.D. in Toxicology from Texas A &M University. She currently teaches undergraduate Biomedical Anatomy and marine animal anatomy, and has won multiple awards for her teaching. Her research focus is student learning. Her primary goal is the development and testing of interactive and immersive teaching tools such as virtual reality and tactile kinetic models to facilitate understanding of difficult anatomy concepts.

Shinjiro Sueda is an assistant professor of computer science at Texas A&M University. Prior to this appointment, he was an assistant professor at California Polytechnic State University after completing a post-doctoral fellowship at Disney Research Boston and MIT. He received his Ph.D. from the University of British Columbia. His main research area is computer graphics and animation, specializing in physically based animation, biomechanical simulations, and computational fabrication.

Ben Heymann has always had a passion for 3D design in forms ranging from 3D modeling to animating in Virtual Reality. The concept that he can bring imagination into reality excites his passion for Visualization. He has a strong interest in character/asset creation along with developing in VR. Seeing the user physically-engaged in an enjoyable experience that he has created, inspires him to keep creating. Going through his undergrad in Visualization at Texas A&M and currently pursuing his master’s degree has shaped him into the person and artist he is toda 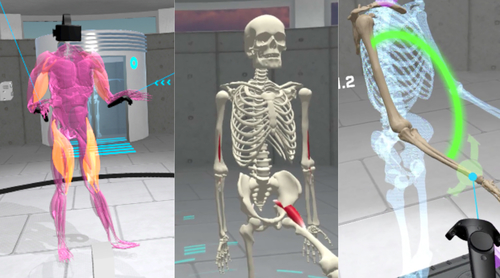 Summary: Flow Zone is a VR synesthetic playground where players become both DJ and dancer simultaneously, blending visuals, audio, and haptics into one synchronized experience to effectively allow players to enter a flow state. Using the body as an instrument, players dynamically create and engage with their personal immersive soundscape.

Author(s)/Speaker(s) Bio:
Tanner utilizes the power of technology to create transformative technologies to improve people's physical and emotional well-being. He's worked as a VR designer in both academia and industry, building off his background in cognitive science and psychology to create applications that explore and enhance the human experience. For the last two years he has created Flow Zone for his research into the flow state at Keio University's Graduate School of Media Design. He attended the Transformative Tech Academy this fall to forge a deeper connection with the TransTech community and currently works in Tokyo as an XR designer for Enhance.

Benjamin Outram completed his DPhil at the University of Oxford’s Department of Engineering Science. Since completing his PhD, Ben received a Daiwa Scholarship and spent 4 years in Japan, where he completed a Postdoc in Media Technology with a focus on virtual reality. His VR work includes Crystal Vibes, Planet Juggle and Synesthesia VR which have been showcased at Sundance Film Festival, Siggraph and Tokyo Game Show amongst others. He now works at Shell in Business Development for VR/AR. Please visit his website to see more of his work, at www.BenjaminOutram.com

Graduated from the Department of Mathematical Engineering and Information Physics, School of Engineering, the University of Tokyo in 2005. In 2010, received his PhD in Information Science and Technology, the University of Tokyo and joined KMD. Member of the board of the Virtual Reality Society of Japan, the Reality Media Institute of Technology and the Superhuman Sports Society. Research activities include embodied media technology and applications that integrate haptic interfaces, embodied interactions, and 3D vision. Extensive research has been demonstrated in SIGGRAPH Emerging Technologies. At KMD, co-director of the Embodied Media project and the Superhuman Sports (http://superhuman-sports.org) project. 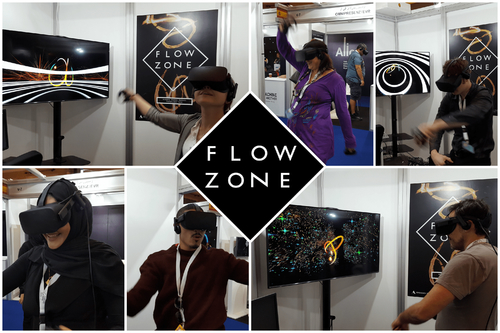 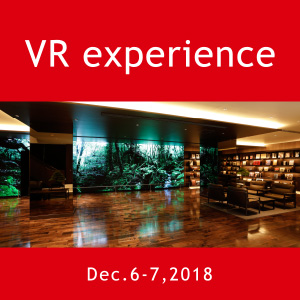